Pulled 70,000 light years across the galaxy, the Starfleet-Maquis mixed crew of the U.S.S. Voyager transverse dangerous regions of space to find a way home. (1995-2001)
About The Show Editor's Corner Characters Ships
Season Index:
1 2 3 4 5 6 7

Star Trek: Voyager – About the Show

The fourth incarnation in the franchise, Star Trek: Voyager launched the UPN television network when it premiered on January 16, 1995. The series revolves around the crew of the U.S.S. Voyager – a mixed crew encompassing both Starfleet and Maquis members – and their quest to return home after being whisked 70,000 light years across the galaxy by an alien being called The Caretaker. Isolated from Starfleet and presumed dead, Voyager must transverse dangerous regions of space to find a way home. 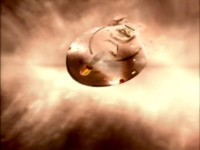 Voyager is pulled across the galaxy (“Caretaker”).

A large portion of Voyager’s crew are killed in the journey to the Delta Quadrant. In addition, the renegade Maquis ship is destroyed defending the Ocampa from a Kazon attack. As a result, Janeway brings the two crews together aboard Voyager, along with several additions throughout the series’ run. 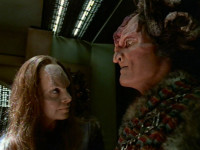 The first two seasons of Voyager largely involve Voyager’s supreme isolation from Starfleet, along with exploring frictions between the Starfleet and Maquis crew members. Its primary nemesis in the first two seasons are that of the Kazon. While inferior to Voyager, the ship’s isolation and lack of resources make the Kazon a dangerous threat. In particular, the Kazon-Nistrim sect, lead by Maj Culluh, become an ongoing threat to Voyager after two members of the crew defect to the Nistrim. A secondary nemesis during the first two seasons comes from the Vidiians, who intend to seize the Voyager crew to harvest their organs.

The first two seasons also focus heavily on The Doctor’s fight for equality and freedom aboard the ship, along with his social development.

By Season 3, Star Trek: Voyager started to find its pulse, although, it admittedly remained on life support for much of the season. The show’s overall look, feel, and general direction sees dramatic changes throughout the season. The result is a season that is arguably the show’s darkest and most experimental, with obvious foreshadowing of future events.

The slow-moving Kazon arc is wrapped up in the Season 3 opener, “Basics, Part II,” which sees the end of Maje Culluh and the death of Seska – whose character returns in the season’s penultimate episode “Worst Case Scenario” and again in Season 7’s “Shattered”. 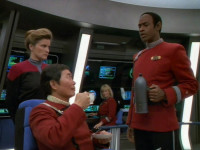 Janeway, Tuvok, and Sulu aboard the Excelsior (“Flashback”).

The season pays tribute to Star Trek’s 30th anniversary in its second-episode “Flashback,” which revisits events from the sixth Trek movie, “The Undiscovered Country.” Many actors from the movie make appearances in the episode, with George Takei reprising his role as Captain Sulu.

Voyager pays another homage to Trek’s history in “False Profits,” where we see the return of the Ferengi characters Arridor and Kol, who became stranded in the Delta Quadrant during The Next Generation’s third-season episode “The Price.” Due to the show’s setting, this would be one of only two prominent appearances of the Ferengi on the series (the other being Season 7’s “Inside Man”).

The Doctor is freed from the confines of sickbay when he obtains the mobile emitter in the time-traveling two-parter “Future’s End.” The events of this episode are later explored in Season 5’s “Relativity.”

A desperate Neelix gets in over his head (“Fair Trade”)

Midway through the third season, “Fair Trade” marks the clearest distinction between the show’s past and its future direction, when the ship moves beyond the wealth of Neelix’s knowledge and into truly uncharted territory.

The Borg, which will debatably become the show’s most prominent antagonist, are first introduced in “Blood Fever.”

The Borg return more prominently in the following episode, “Unity,” before making a bold return in the season finale, “Scorpion, Part I,” which, along with its fourth-season conclusion, was once voted the series’ best episode. Not only does “Scorpion” cement the Borg’s presence, it introduces us to a new species that’s potentially even more threatening, Species 8472, and sets up the addition of a new character, Seven of Nine.

Kes in “Before and After”

The character of Kes undergoes significant changes throughout the third season, in appearance and personality. “Warlord” is arguably the first evidence of such changes, which are further examines in “Darkling.” Unfortunately, the changes prove unsuccessful, resulting in the character’s departure by early the next season.

In addition to stage lighting changes, which resulted in visibly darker scenes, CGI effects for rendering external shots of the ship rose to prominence – particularly in “The Swarm.” Janeway’s hair is let down – physically and figuratively, with a Janeway that’s more personal and practical.

We see more foreshadowing in “Before and After,” which sees a time-traveling Kes during events seen in season four’s two-parter “Year of Hell.” 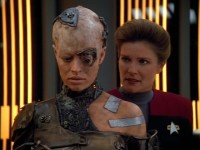 Seven of Nine joins the crew (“The Gift”).

Widely regarded as Voyager’s best season, Season 4 opens with the exciting conclusion of “Scorpion,” which introduces us to a new character, Seven of Nine, who will be featured prominently throughout the series’ run.

With the addition of a major character also sees the departure of Kes in the season’s second episode, “The Gift.” Kes returns in the Season 6 episode “Fury,” but her absence is otherwise barely noticed. 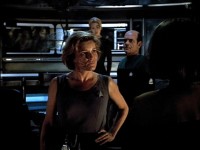 The midseason two-parter “Year of Hell” revisits events foreshadowed in Season 3’s “Before and After,” albeit slightly altered. The episode features stunning visuals, a great guest star in Kurtwood Smith, and an exciting ending.

Starfleet finally learns about Voyager’s fate when The Doctor travels through an alien network of stations to arrive in the Alpha Quadrant, only to fight off Romulans with the help of the whimsical EMH-2 (played by Andy Dick) in “Message in a Bottle.” 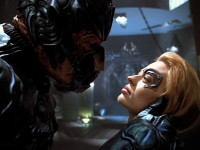 A new species is introduced, the Hirogen, who become a common theme throughout the season… with appearances in five episodes, including the period-piece two-parter “The Killing Game.”

The season comes full circle with its finale, “Hope and Fear,” where Janeway is forced to confront the consequences of her actions in “Scorpion, Part II.” The episode also marks the first time Seven of Nine truly accepts her life as an individual. 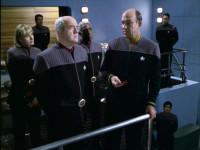 Voyager’s fifth and sixth seasons continue the direction and tone set in Season 4, with further character development and bold storylines. The Borg continue to be prominent, especially with the addition of new Borg crewmembers in “Collective.” The events leading up to Seven of Nine’s assimilation as a girl are also explored in detail during the show’s first feature-length episode, “Dark Frontier.”

The Delta Flyer is introduced in “Extreme Risk,” which also tackles news of the Maquis’ defeat in the Alpha Quadrant. 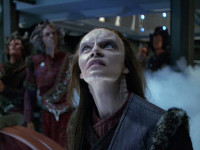 Seska and the Kazon return (“Shattered”).

The bond amongst Voyager’s familial crew is stronger and more evident than ever before. Seven and Janeway’s parental influences are both felt throughout the season, particularly with their relationship with Icheb, as well as Janeway’s role as Godmother to Q’s son. The Maquis-Starfleet rivalry is long since forgotten, although it is explored in such episodes as “Repression” and “Shattered” – both of which tie into past events. 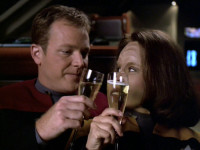 After years of obvious flirting, B’Elanna Torres and Tom Paris finally get married in “Drive,” and become expected parents in “Lineage.” Seven continues to explore her individuality, including enhancing her romantic interests in “Human Error,” which is later expanded upon in the finale “Endgame.”

The season opens with the conclusion of “Unimatrix Zero.” In its original run, Season 7 also featured another mid-season feature-length episode, “Flesh and Blood,” which sees the return of the Hirogen and examines the repercussions of sharing holodeck technology in Season 4’s “The Killing Game.” The episode also once again examines the equal rights of holograms – a recurring theme throughout the series’ run. The season also sees one other two-part episode, “Workforce,” before its feature-length finale.

Q returns, for his last official Trek appearance, in “Q2,” where he deposits his rebellious teenaged son (born in Season 3’s “Q and The Grey”) with Captain Janeway for much-needed parenting. 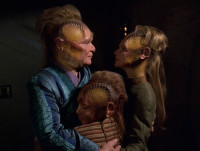 Neelix departs Voyager in the heart-warming episode “Homestead,” where he finds love and settles down in a Talaxian colony. He does return with a cameo appearance via subspace in the series finale.

“Shattered” is a good homage to the series’ past, which sees the return of Seska – who was killed in the Season 3 premiere “Basics, Part II” and last seen in “Worst Case Scenario.” The time-fractured episode revisits many past events. 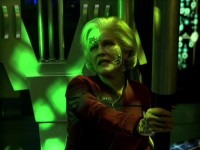 Janeway deals a crippling blow to the Borg (“Endgame”).

The two-hour feature-length series finale, “Endgame,” finally brings Voyager home and deals a crippling, potentially fatal blow to the Borg. Since “Endgame” features the latest events ever shown on the franchise’s canonical timeline (except for the far-distant future), we are uncertain of the Borg’s ultimate fate.