The widowed Doctor Crusher juggles the responsibilities of raising her son alone while also serving as Enterprise's Chief Medical Officer. Crusher, along with her later husband, had been acquainted with Captain Picard long before joining its crew. 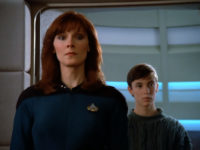